The cost per gallon of drinking water is based both on fixed costs and variable costs. Fix costs include the cost of the raw water if any, the electrical cost to pump it to the treatment plant, and of course the costs due to things like rent, lighting, heating, trash, etc., for each particular treatment plant. Variable costs include chemicals such as chlorine and aluminum coagulants, labor, and laboratory costs for the testing.

As many State Governments have declared war on small businesses, the total volume of water society is using has gone down. Utilities have a tremendous amount of fixed costs in their operation, having to cover those costs over less gallons pretty much tells us that at some point there will have to be a point of adjustment in the form of higher utility bills. How much can the taxpayer absorb? Leaders seem to think a hell of a lot more than we already have. To government, our pockets are endless. 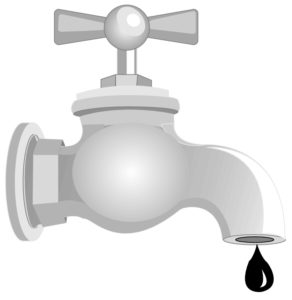 Here is the problem; virtually every manufacturing process depends in some part upon water. Most, depend on it heavily. More than any other resource, even oil, when the price of water escalates economies die and people lose their livelihood. Don’t be surprised to see your cost for water rise soon.

It is my belief that we have allowed government to overreach into our lives over a virus that compared to other health risks in life, is minuscule. The belligerent American spirit can overcome almost anything, however when our water becomes artificially expensive and scarce, I fear that may be a blow too severe to recover from.