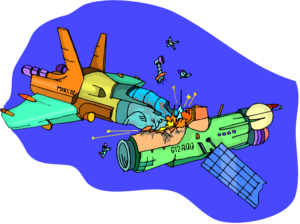 Whether we are talking about water, chromium, copper, fluoride, or any elements in our periodic table, they have come to us in fixed amounts. All elements should be treated as the precious gifts they are. However you believe the elements have come to us, by God, Big Bang or from Aliens, the elements belong to no man, but belong to all men. They certainly don’t belong to governments.

For years NASA has been taking our precious elements and blasting them out into parts unknown in outer space, never to return to Earth again. This begs a few questions. By what right does NASA have to deplete Earth’s Resources? At what point in the future does this continued loss of mass of the Earth, and added mass to others moons and planets begin to affect orbits, gravity, rotation, and climate? Remember, more and more nations are getting into space exploration, and while today one can argue that the mass of elements used space machines is insignificant compared to the entire Earth’s concentration, the fact of the matter is, even an eye dropper can empty a swimming pool over time. What is the effect of continued space launches 25, 100, 1,000 years from now.

I remember the age of the plastic boom, and I recall stories telling us how good this was. Of course now, 50 years later we are drowning in it. I think it might be a good idea to take a look at what depleting our resources like this might eventually do to the planet. Remember, once that stuff is launched, we don’t get it back. 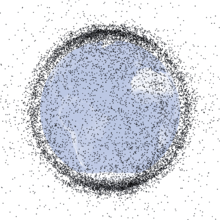 Finally, one time NASA senior research scientist Don Kessler created mathematical models to describe the dangers of the orbital junkyard that all of our space activity is causing. Essentially, our launches leave a bunch of space debris orbiting the earth at high speeds. This junk collides with other junk and makes smaller particles. Then these particles collide with more particles creating even more junk. The problem is, we have so much space junk orbiting our planets that one day soon, it may cause our satellite systems to become inoperable. Can you imagine what a loss of GPS satellites would mean to man?

I personally don’t think NASA is a very responsible organization, and they certainly are not contributing to man’s sustainability. I believe this is something we all need to seek more information, and drive awareness of.

READ ABOUT THE KESSLER SYNDROME