There is a class of chemicals known as carcinogenic pre-cursor known as chloro-halo-methanes, also called halo-methanes for a short form. Let’s refer to them for convenience as CHMs. These compounds have been designated by science as to be highly probable agents at stimulating the formation of cancer cells in humans and other mammals. For this reason, we refer to them as precursors.

In municipal drinking water, CHMs are also frequently referred to as the byproducts of sanitization or disinfection. CHMs are formed by combining chlorine with decaying/degrading organic compounds. 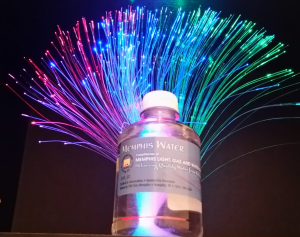 The chlorine of course, comes from the municipality in the sanitization process. To kill bacteria, there is simply no war around this part of the process. The “methane” portion comes from organic debris naturally decomposing. Organic matter consists of algae, fungi, bacterial slime, leaves, dirt, silt, dead fish, insects and all the other naturally occurring life forms we find in nature. Of course the wastes and pollution that you and I improperly dispose of also contribute to this organic load.

Surface water, that is to say lakes, rivers and streams contain great amounts of organic material, hence the adding of chlorine to these kinds of water lead to a higher potential for producing CHMs. Conversely, because Memphis water comes to us from far beneath the ground, where organic compounds and lack of sun combine for a very clean water, our utility, MLGW has to add far less sanitization products to meet safe drinking water regulations.

2 thoughts on “The Benefits Of Memphis Water – Volume 2”