I readily admit that up until this very point in time I really have been what Climate Change proponents call a denier. I have always proudly stated that I am an environmental scientist but to be fair, most of my criticism was not based in a complete data analysis on my part. Like those I challenged for only looking at the data that supported their case, I too was guilty of not doing a full scientific analysis using all the available data. With that considered, I am presenting the following unbiased timeline graph that actually documents some proven, important global changes and plots them against actual observed carbon dioxide levels. We begin our study in 1920 and project out to 2025. My findings even astonished me and gave me an entirely new perspective on Anthropogenic Climate Change. There are two fundamental points that will help the data make sense to you, so let us earmark them.

1920 marks the time when CO2 levels started to rise in a fashion not seen before. We weren’t in tune enough then to realize what was happening, but looking back now, we know when this whole climate change phenomenon began. On the graph, it is crucial to note the convergence of scientific observations of three previously independent phenomena. Note how these phenomena meet each other in 2006. Now let’s take a look at what the graph shows us. 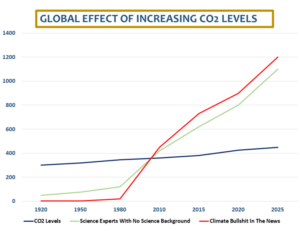 What I did not include in my graph was that after 2006 we saw an exponential increase in the funding of theretofore underachieving, unremarkable college professors, more appropriately known as satchel asses who quickly realized that jumping on Gore’s goofy bandwagon could get them the notoriety that their own insight and original works could not.

What I did include on my graph however, is the total investment made in studies that were either contrary to CO2 theory, or that examined the many other parameters that affect our environment. If you cannot see it on my graph, that is only because I didn’t know how to graphically represent zero.

Anthropogenic Climate Change is as much of a scientific phenomenon as Star Trek is. It is not based in anything of the scientific world, but instead is a general supposition that CO2 is increased, Temperature has increased, therefore CO2 is causing increased temperature. This is not science. It is the thinking of imbeciles.

Let me also be clear. I do not deny that there are products that indeed reduce carbon footprint. My position is that doing so does not effect Earth.