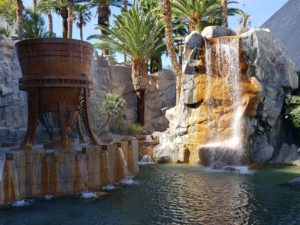 Las Vegas and water are two of my most favorite things on Earth. Did you know that it was water that caused Las Vegas to be born? It was not the mafia, gambling or showgirls; it was water. The phrase Las Vegas means, “The Meadows” and the city was seeded and named when the explorer Rafael Riviera, a member of the Spanish trading group with Antonio Armijo discovered rich water resources in the area. The explorers then actually extended the Old Spanish Trail from New Mexico into Nevada, and into what would one day become a prosperous and beautiful city.

Over the sands of time, the flowing Colorado river created an abundance of fresh water wells that brought many to quench themselves and their animals. Once word got out, business started to pop up to feed, house and service the travelling traders. Soon the rail industry got wind and came to Las Vegas. With the influx of transportation, commerce and housing, soon came the discovery of minerals and the development of a healthy mining industry, that still percolates today.

And let us not forget the creation of the world’s largest man made water project in the history of man, Lake Mead complimented by the Boulder (Hoover) dam and hydroelectric plant that brings electricity to millions of people in three states. The impact water has made on the economic welfare of the Las Vegas area staggers the imagination.

The Strip? Without water, there would be no Las Vegas.