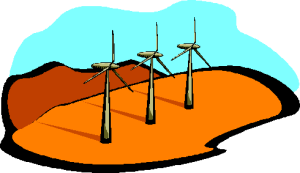 It is a popular misconception that the wind used in wind farms is free, and that the resulting energy produced is also free. Conversely, even a seventh-grade science student could tell you that this is not true. I am hear today to tell you that building wind farms will infact contribute to world-wide drought.

Let’s look at the real science.

First, we know from scientific law that energy cannot be created, nor destroyed. (Law of Conservation of Energy). We also know that there is no such thing as a perfect machine; there is no such thing as perpetual motion or energy. In other words all energy reactions must follow the equation A = B + Δ , where A = energy form #1, B = energy form #2 and Δ = energy lost to heat. In a simple form, Gasoline = Car Motion + heat.

So too, then it is with wind. The wind is not infinite, so if we take wind A, we produce energy B, and we lose energy to the heat of the turbine. You may believe that wind is free, but it is not, just like gasoline, if we consume x amount of wind, the Earth, our fuel tank of wind, has less wind left available.

If you don’t believe me, look at the following link, because scientists involved in a Stanford-led study agree with what I am saying. While impractical, Stanford correctly states that if there were enough off shore wind farms, hurricane winds could be tamed. People, wind is not infinite. If you tame wind with turbines, you rob the planet of wind.

So, let’s address the point. Wind farms cause drought. It is simple to grasp, as long as you are willing to see real science and abandon the euphoria and band wagon of believing that wind turbines are a magic, clean technology. Because they are not. 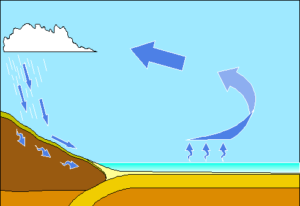 The Earth cools itself with wind. If we rob wind, the Earth warms. Also, if we reduce wind, less water will evaporate which in turn will lead to less rain, more drought and a warming planet. Making matters worse, the Earth cools itself through reforestation. Wind continuously blows seeds and pollen all across the planet, causing vegetation to grow even in places uninhabitable by man. By reducing our winds, turbines reduce the Earth’s ability to reforest itself, thereby causing adding even further to it to global warming and drought.