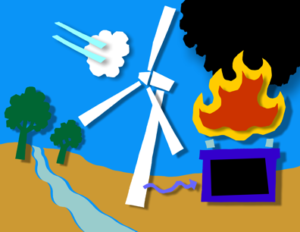 The President made a pretty startling statement about wind turbines, suggesting that among other negatives, the machines cause cancer. Is this simply nonsense? Is it outrageous? It is simply political? Well, before attacking the President, let us not forget that Alexandria Ocasio Cortez is calling for the elimination of airplanes, cows, and all fossil fuels. Not only that, she has many Democrats signing on to this plan. So before we start casting stones at the President, we need to admit that our government in general, is not exactly a holding company for the worlds’ greatest minds. That said, let us look at the science of wind turbines.

First off, many studies, including a recent one done by The Australian Parliament have routinely acknowledged that people who live near turbines complain about “tinnitus, raised blood pressure, heart palpitations, tachycardia, stress, anxiety, vertigo, dizziness,” and more.

Proponents of wind turbines cry out that there are no reports of cancer. Is this scientific proof that this technology is safe? Let us not forget that it was not until decades later that we learned that Asbestos, DDT, Thalidomide and Carbon Tetrachloride caused cancer and birth defects. Turbines have not been around for that long. However, if the evidence shows people having heart, stress and balance problems this early in the study, only a moron would not be concerned about what other health problems are going to develop in the future.

The sad danger here is that if this were an oil-based technology, environmental activists would be screaming for it to be taken off the market. However, because wind-power fits the narrative of clean energy, the activists simply ignore the health of these poor souls.

Here is the truth. The Laws of science teach every scientist very early on in his education three important, indefatigable principles.

Ask yourself this; If your child lived near a turbine and complained of the aforementioned health care problems would you tell them to ignore it and just trust that wind technology is safe? How would you feel if it was you, in your home suffering these health issues once turbines located near your home?

Finally, as I have demonstrated elsewhere, Wind Turbines heat the planet. Nobody wants to talk about this, but science cannot be denied. So, while there is no proof that turbines cause cancer, they are indeed hurting people and contributing to global warming. This is not a good technology for man or the Earth.