My lovely wife Cathy has recently addicted me to Norwegian Cruise Line cruises. So far we have gone to Alaska out of Seattle, and Cuba out of Miami. We leave in 30 days for the Virgin Islands, again in June and over my birthday in December. Since becoming a sailor a lot of folks have asked me the origins of drinking water on cruise ships. The ideas people have presented to me have run the gamut of silly-to-ridiculous-to outright impossible. Still, water concerns on a cruise ship are important. I know about it, but this is not something that cruise lines really share, and I guess really other than advertising that they have safe water technology, I don’t know they really need to. I mean, nobody asks about the cooling system or the lighting systems, but those are also important. But, let’s talk about water.

In the old days, ships would merely fill up huge onboard tanks with tap water, pressurize it with pumps and head out to sea; hoping they didn’t run out or face contamination. Titanic, anyone? Blech! As technology improved ships looked for ways to be streamlined so at one point they carried onboard purification systems that would take toilet flushes and shower water and recycle it into drinking water. Sounds yucky, but it was safe. The problem was that the Reverse Osmosis (RO) technology at the center of these systems could only convert 50% or so of the total wastewater back into drinking water. So on those ships, there was the complication of collecting the waste of the water system and putting it into the general waste tanks. This added complexity. 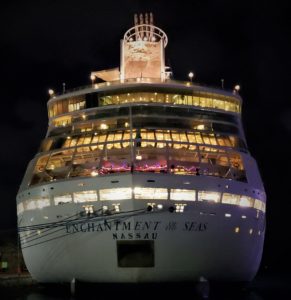 In addition, in those days there were also ships that carried tanks of fresh water for drinking and then used seawater for toilets and showers. This created a problem of corrosion in the pipes, sinks, and drains.

Enter modern technology. Today the cost of desalinization RO has made it possible for cruise ships to take seawater and treat it, store it and deliver it, as an endless supply to passengers. Unless there is equipment failure your modern cruise ship will not likely run out of drinking water. Overall cruise ship water is very similar to products such as Dasani and Aquafina. The water is purified, minerals are added to make it taste good, and voila, into tanks of 1.5 million gallons or more and then on to you.